Choir for the blind and visually impaired

A choir for the blind and visually impaired is appealing for new members across Rutland.

There are 224 people with visual impairment or sight loss across Rutland and the Visionary Vocals Choir would like those with an interest in singing to join them.

The choir was set up and continues to be supported by Oakham based opticians Simmons Optometrists. This means all the singing sessions are free to join.

Simmons Optometrists also prints the song sheets at a range of print sizes to enable the members to follow the lyrics.

The group meets for two hours every Thursday between 11am and 1pm at the Railway Inn in Oakham. Wheelchairs, guide dogs and carers are also welcome!

Members of the choir choose popular songs to sing at each session which range from the 1980s classics to the present day top 40 hits. One of the group’s favourites is the Katrina and the Waves classic, ‘I’m walking on Sunshine.’

The group currently has up to 18 members, depending on the week, but they are looking to expand with the long term view of performing to audiences to raise funds for charity.

“Here at Simmons we are passionate about the health of our clients and this includes their wellbeing. The benefits of singing are well known and we want to encourage as many people as possible to join.
“People with sight loss and their carers are a group in society which can easily become isolated. The aim of the Visionary Vocals Choir is to provide an inspirational and fun activity, which is not about what people can’t do but centres on what they can do. There are no auditions for the choir, just come along and join in.”
Visionary Vocals Choir leader Diana De Wet said the camaraderie between choir members is magical.
She added: “Singing is better and cheaper than any medicine and every voice has a place in our choir. Our aim is to have some great fun. It’s not just the choir; it’s also a social event. After the sing-song we all have lunch together and enjoy each other’s company.”
Ends.
If you would like any further information or you would like to arrange a to take a photo of the choir please contact Sarah Newall the number below. 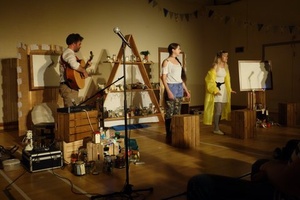 A thought provoking series of short stories at the Community Centre on Sunday was the latest theatre experience to be offered to the village. It was imaginatively presented and the audience clearly enjoyed it.

THE GREETHAM DUCK RACE
Preparations for the annual Greetham Duck Race started early and the weather was perfect if you happened to be a duck! Tents were erected at the start and finish lines to keep the many spectators dry, and the village scene was set.
At 11 am the rain stopped and we were ready for the start of the first of four heats each with 50 ducks .Steve the starter CradDUCK and his helper Jessica Easson released the ducks which set off at great pace due to the high level of the stream. The course marshalls Toby, James and Thomas (the comedian Defrees) could hardly keep up. Each race seemed to get faster, with the top 3 of each race going through to the final. The gathered crowd could hardly contain themselves!
The 12 ducks in the final were, 17 Andrew Collin, 49 Sarah J Harding, 14 Oliver Wight, 95 Bill Harding, 76 Paul Simpson, 59 Ann Gould, 113 Rees Richards, 146 Janice Walters, 124 Deb Easson, 154 Tom De Vries 167 Harry Arkle and 155 Bilson, and some of the excited owners were present to witness the spectacle, it was very exciting to see the top ducks set of neck and neck or beak and beak! James was that excited he fell in the stream which wasn't at all funny! (The annual ‘I think he's quacking up joke’ was murmured)
The results of the close fought final were 1st  76 Paul Simpson £15, 2nd 124 Deb Easson £10 and 3rd 95 Bill Harding £5, and thanks to all podium winners who donated their winnings back to our chosen charity .The booby last place was 154 Tom De Vries who won a giant inflatable duck!
After the race we all adjourned to the Plough where we drew the well supported raffle, all in all we raised £505 for The Brain Tumour Charity.
Brain Tumours are the biggest cancer killer of children and young adults under 40, All funds raised will go towards vital research.
Many thanks to all who helped on the day and for all who attended and for your generous support.
Roly & Debbie Easson 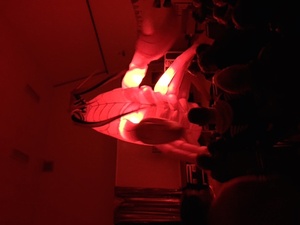 Meet Maureen , star of the Avanti Display show ' Six Impossible things' at the Community Cente  8th May 2015. Six Imposssible things happened ,was it magic or science! We had mine;comedy; music and fantastic audience participation Once again the Centre stage team have sourced  a show  wonderful worthy of an 'Edinburgh Fringe' performance and it was on our doorstep
The next show is by the Gramaphones Called 'Wanderlust ' is on Sunday 7th June starting at 7.30Tickets and information available from Helen Mcgarrigle 812804
View the full gallery 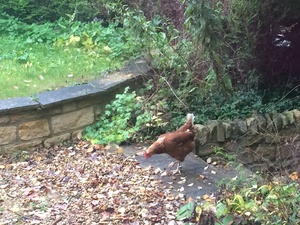 Hi we have a chicken in our garden which has moved in and is quite happily laying eggs in a nest, however it is not our chicken! Could you advertise the chicken on the website and ask people from greetham if they have lost one,worried it may get knocked over on the road,