Twenty five members and one guest were present for the meeting. A birth-day posy was presented to Gill Hodson. Our Speaker was Malcolm Britton who entertained us with an interesting, informative and at times humorous account of the history of Brooksby village. It appears that there has been a settlement in Brooksby from pre-historic times. Proof of this was found in the quarry on an archaeological dig. We were then taken through time to a Danish settlement right up to the present day. Brooksby Hall has a very rich history and was owned by the Villiers family from 1278. In 1592 it was owned by the 1st Duke of Buckingham, who it was said had the ear of King James 1st until he met an untimely end when he was murdered. The Villiers family resided in the hall for 500 years until 1711/12 when the line died out with the death of William and Anne Villiers. Malcolm explained to us that the uncertainty of the year was due to the changes made in the calendar at that time. We were also informed that the Villiers had many descendants and can claim 16 British Prime Ministers as descendants. These include Antho-ny Eden, Sir Alec Douglas Hume, Winston Churchill, and David Cameron to name but a few. This impressive heritage did not end there, apparently the Spencer family, Princess Diana, The Queen Mother and consequently our present royal family can all be traced back to the Villiers line. The Hall then became home to various families and it was used a great deal as a hunting lodge. In this period it is claimed that Lord Cardigan of the Charge of the Light Brigade fame resided in the Hall. To be followed in time by “Beatty of Brooksby” (so named by the people) who received the German surrender at the Battle of Jutland and whose flag hangs in Brooksby Church. There is also a bronze bust of him in the church. The Hall had many uses as a hospi-tal, school, and finally as an agricultural college which today has in excess of 600 pupils. Tea Hostesses were Hazel Hinch and Gill Hodson. Vote of Thanks was given by Pat Kenworthy. Our next meeting is on 12th March. Tales of the unexpected by Guy Hodgson. Guests are always welcome.

The WI annual Soups and Sweets event went very well this year. Over 90 people attended and there was a selection of 16 soups and 16 puddings all made by the WI members. It was a wonderful occasion enjoyed by all. We look forward to seeing you next year.

A very entertaining night with about 70 people attending. It was great to see the young girls join in. Many thanks to McGoo, who as always were superb. 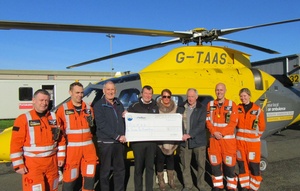 Gathering donates £2200 to local Air Ambulance
On Wednesday November 8th, some of the Greetham Gathering’s Commit-tee and helpers met Jo Payne from the Derbyshire, Leicestershire and Rut-land Air Ambulance Service (DLRAA) at the Air Ambulance base at East Midlands Airport to present a cheque in support of the DRLAA. In 2014, the first year of the Greetham Gatherings, the committee were able to present a cheque to the DRLAA for £450. In 2015 the donation was £1500. In 2016 the donation was £2000. In 2017 we hoped to exceed the previous year’s amount, but this has proven to be much more challenging. We had some great sunny days where record attendances were recorded, but in Septem-ber we had dreadful weather and that, understandably, put a dent in our fund raising hopes. However we still had our most successful year yet for the Gatherings, and with all the extra support from the public, the committee were delighted to present a cheque for £2200 to the DLRAA.
The picture (front page) shows Martin Fairbairn, Treasurer for the Greetham Gatherings, with Roly Easson, Lorine Mohamed and Gilbert Thomas pre-senting a cheque for £2200 to the DLRAA, who had the on-duty pilot, para-medic and 2 doctors to accept it. 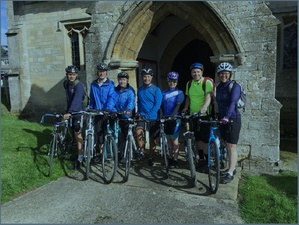 A team of seven cycle riders from Greetham participating in the Ride and Stride sponsored event has raised over £900 for the Rutland Historic Churches Preservation Trust.

Calling themselves the Mud, Sweat and Gears team they cycled around Rutland visiting (44) of the (64) churches in the county. The money from their sponsors goes to the Trust for the preservation of the many beautiful and ancient church buildings in Rutland. Greetham parish church will get half of the funds raised for the church roof fund.

Team leader Sylvia Bland said ‘ We split into three groups in order to visit as many churches as possible. The riding was tough during several heavy rain showers but this was more than compensated for by the warm welcome at every church where drinks and snacks were generously provided. A most enjoyable adventure for a very worthy cause’.

PS Congratulations to The Magnificent Seven-a splendid effort - also to those kind people who sat in church recording the cyclists and walkers, those who baked such wonderful cakes and provided drinks. Grandson Paul and I also cycled from Greetham and had a great day out, only be-ing rained on once. We heard from others taking part that the refresh-ments at Greetham were the best – though Paul thought Edith Weston’s fruit cake, chocolate rolls etc. first rate. We visited twenty churches .

As a trustee with responsibility for seven churches including Greetham, I am delighted that we have already allocated a grant of £2000 towards the roof repairs. Our function is to give grants and loans to places of worship within the county in order to keep them in good condition - and open.

What a great day! It was lovely to share it with the scarecrows giving a fantastic atmosphere around the village. The fete was opened by Kit and Judy Swinfen, long standing church goers though relatively new to the village. Judy was given a posy of flowers by Ellie Arkle.

The Church would like to give massive thanks to all those who contributed to the fete. We are ever grateful for your support and generosity in making this event a success. Thank you for your donations to the stalls, raffle and tombola, for sourcing materials for the games, providing the roller coaster, for cake baking, for providing lots and lots of help on the day and for turning up to enjoy yourselves. The winners of the Men’s Cake Baking was a previous year’s winner, Harro DeVries with his gin and tonic cake!

I’d like to say special thanks to our Duke of Edinburgh award volunteer, Maaike DeVries, who did an amazing job with the jam jar tombola, treasure hunt and shop window display.

We raised in excess of £2,400 which will go towards our funds for repairing the church roof. To see photos of the day, please go to the Greetham Church Fete facebook page.

Thanks from the Church Fete Committee