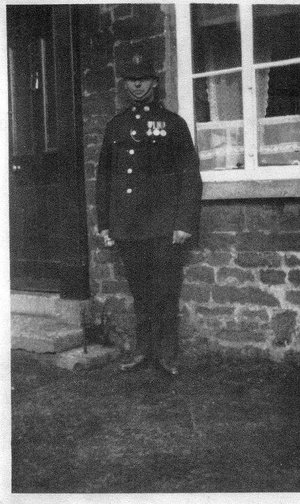 Hello, I came across your village website by accident today and thought you may be interested in the attached photo. The one with the motorcycle was taken in Great Lane, outside the Police House, the second was poss at the rear of the house (looks nothing like this now) and the other photo is of Greetham school pupils, my mother 6th from the left, second row and her brother 2nd from the left, front row.
My grandfather ,Charles Smith, was Greetham village policeman during the 1920's, after returning to Rutland after the Great War. He and my grandmother, Dolly and their two children, Dorothy (my mum) and her twin brother, Jack, lived in the police house in Great Lane. He patrolled the Great North Road on his motorbike/sidecar. I believe he was the village bobby until approx 1932/3 when unfortunately, he died, I believe as a result of an injury during the war.
My mother and her brother went to the village school and I think they were around fourteen when they left Greetham.
The family moved to South Luffenham where my grandfather and grandmother grew up and where I was born, I now live in North Yorkshire.
I did meet a gentleman by the name of David Bland when I visited the village a few years ago, he actually lived in the old School House and we exchanged some information but I would be interested to know if anyone knows anything about that time or may have heard stories about my grandfather.
Janet Cooper 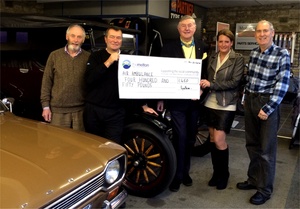 Greetham Gathering supports local Air Ambulance
Following a very successful first year in 2014, the organisers of the Greetham Gathering were pleased to present a cheque to the Derbyshire, Leicestershire and Rutland Air Ambulance (DLRAA) for £450. The presentation took place on 14th November, at Colin Easson Motors and was received by John Nowell – the representative for DLRAA for Rutland, who thanked the Greetham Gathering for their support and that the donation would be put to towards the local service.
Dates for the 2015 Gathering season have been set as 14 May, 18 June, 16 July, 20 August and 17 September (all the 3rd Thursday of the month), from 5:00pm till dusk, and we look forward to your continued support. We shall make more announcements

closer the time, but will continue to support the DLRAA.
The picture shows, from l to r, Gilbert Thomas, Roland Easson, John Nowell, Loreen Mohammed, and Martin Fairbairn, Gilbert, Roly and Martin (along with Mike Carr who could not be present for the presentation) are the Gathering committee and Loreen has organised fund raising through very successful raffles at the Gatherings.

Knitted poppies
Those of you who attend the church or walk past it regularly will have realised that the knitted poppies have been removed. I want you to know that we carefully took them down and have stored them away for future events. The ones that were in the churchyard have been washed and have cleaned up beautifully, even the ones from the gate under the lime trees which were in a pretty poor state. It was very moving to look at every one, all hand made by people in the village or with some connection to it. All were slightly different, but done with remembrance in mind. I counted them. There were 342 and that excludes the small ones that were sold for people to wear with the proceeds going to the British Legion and the fund to add the missing name to the memorial plaque in the church.
The plan is to use them again to decorate the church, or other parts of the village if that is wanted, to commemorate the centenary of other key dates from the Great War during the next 4 years, culminating in Remembrance Sunday 2018. These long winter evenings are ideal for knitting, so if you want to carry on knitting poppies, we would be very pleased to have them. If you would like to start, but need some help or encouragement then contact me 868291 or Helen McGarrigle 812804. There were 888,246 poppies at the Tower of London.... Jackie Gauntley

Greetham Bowls Club
Our village Bowls Club is in very real need of new members. We have a fine green and pavilion for outdoor bowling right through the summer months and have two indoor mats in the Community Centre hall which permits a decent length for winter bowling.
It is likely that the winter ‘competition season’ will start after Christmas, but for now we are encouraging new members to come and ‘have a go’ on Tuesday evenings at 6.30 pm onwards. We are able to provide instruction in the art of the game and are playing practice contests as numbers permit on the Tuesday evenings. We can pro- vide woods (balls) and help as necessary.
This is a fine, social, sport with Ladies and Gentlemen on a truly equal competitive footing and is open to all ages from teenagers upwards. We are happy to welcome members of other clubs who perhaps do not have indoor facilities.
Please come and join us and receive a warm welcome.
John Hall (treasurer)

The Annual General Meeting of Greetham WI was held after the usual monthly meeting on Monday November 10th in the Community Centre. Twenty three mem- bers and one guest were present and five members sent their apologies. Before the AGM, members were told about plans for the Christmas Dinner, Carol Concert and the popular Soup and Sweets lunch, to be held on February 18th. Carol Fairbairn gave a report on the recent Horseshoe Group meeting in Whissendine and Lorraine Pearce told us about her recent visit to Denman College as the recipient of our An- nual Bursary. She was sporting evidence of her newly learned flower making skills, in the form of a large poppy. President, Helen McGarrigle, spoke about the Rutland Water Centenary Walk and the recent cinema trip to see Effie Gray at Melton cine- ma. As Helen has recently celebrated a “special” posy she was presented with a card and a posy. This part of the meeting concluded with refreshments by Carol Fairbairn, Peggie Butcher, Lorraine Pearce and Pat Evans.

The Business part of the evening then followed. Most of the committee are willing to stand again. One vacancy remained, so Lorraine Pearce volunteered. The new committee therefore will be;
Helen McGarrigle President

Estelle Allen Treasurer
Carol Fairbairn, Gill Hodson, Lorraine Pearce Judith Roberts and Peggie Butcher. Reports were given by the President, Secretary and Treasurer and Carol Fairbairn outlined the planned programme for next year.
Under Any Other Business, discussion took place about the Denman Bursary, The WI County Quiz, Horseshoe Group funds and Federation Activities..
Hazel Hinch thanked the committee for the efforts in making a 2014 successful year. The meeting concluded at 10 pm.
The next meeting will be our Christmas Meal, with entertainment by the Greetham Hand Bell Ringers.