Centre Stage Productions again gave us a very entertaining evening at the Community Centre. Nearly 100 residents enjoyed "Men in General" - a quintet of men with beautiful singing voices and lively repartee. Thanks again to Helen McGarrigle and her team for making Greetham such a vibrant place.

Greetham WI January2015
The Speaker for our first meeting of the New Year was Robert Macleod Smith, who spoke about Water Aid. The Charity’s Aim is to provide clean water and proper sanitation in those parts of the world where this is not generally available, particularly in parts of Africa and India. His talk included some shattering statistics, such as the fact that there are more mobile phones in India than there are proper toilets. A further shocking revelation was that the total number of deaths to date from Ebola Fever is about 8000 in total, whereas 760,000 children under five die from diseases directly attributable to lack of clean water. A visual aid in the form of two containers of water of the sizes that would be carried from a water hole by a woman and by a child was particularly disturbing. All of the funding from the Rutland group for Water Aid is sent to Mali, a former French colony. Robert showed us a video of women and children carrying water from the waterhole, followed by footage of a well being
sunk courtesy of Water Aid. The general rejoicing with much singing and dancing when the water was pumped to the surface was very moving to see. The charity also provides back up to maintain the infrastructure and training for local people to take over maintenance of their supply. In Mali the French army are also very proactive in helping to dig and maintain wells and pumps.
Following Robert’s talk refreshments were served and birthday poses presented to Alison Kirby and Pat Kenworthy. The Quarterly raffle was won by Linda Hall.
A busy week for the WI culminated in our popular annual Soups and Sweets lunch held in the Community centre on Sunday January 18th. The lunch was held in the main hall this year to accommodate the number of people requesting tickets. As always, members rallied round to produce a delicious array of home-made soups and desserts. Seventy four people sat down to lunch, with a formidable back up team of washers up and other helpers. Peggie Butcher presided over the raffle, in which several guests (and the odd member) won prizes.

Carol Singing with the Red Bus

Carol Singing with the Red Bus
A heartfelt ‘Thank You’ to Paul Jenkins for driving the Red Bus around the village for our carol singing just before Christmas. Many people have said how much it was appreciated. As in previous years we were unable to reach everybody in the village, but the result for the Polish Orphanage was £510.00 which should be in Boleslaviec as you read this. I am most grateful for those, both young and old who sang around the village, and by doing so helped those very much less fortunate than ourselves. I look forward to printing the orphanage ‘thank you’ letter- hopefully in next month’s issue. Peter Hitchcox 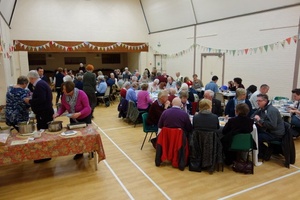 Some eighty people attended the annual Soup & Sweets run by the WI. Excellent occasion enjoyed by all. Thank you WI 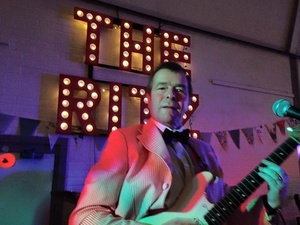