A very big thank you to Anne, Dave, Gill, Roy, Lesley, Jane, Lorraine, Ka- ren, Linda, Sandy, Stef and his daughter for a good morning’s swoop on litter. 16 bags of refuse were picked up from the streets and paths of Greetham in a valiant clean sweep. I am delighted to report that we have noticed a great improvement since our last clear up and found far less dog mess and general litter, especially on the Community Centre field and up GreatLane.Let’shopethisisthebeginningofanewerain Greetham and that we can now be justly proud of our lovely clean village.

Please keep up the good work and take all litter home with you, or pop it in one of the many bins around the village.
Thank you!
Ken Edward Chair Greetham Parish Council

The September Gathering is the last one of the year and this is our shortest event as it starts to get dark quite early. Notwithstanding that, and the usual late arrival of most gatherers, we had a good turn out and as we expected, numbers were down. Having said that, we had some great vehicles on display, and what is very pleasing is that we still attract gatherers who have not been before, so you must be putting a good word out for us amongst your friends.

We had a nice mix of classic cars attend, some old favourites and regulars, and some we had not seen before. We were treated to, amongst others, a beautiful red soft top Mercedes, a yellow 2CV Citroen van (in great condition), a lovely Austin 10/4 convertible, Alpha Romeos, Aston Martin, several Land/Range Rovers, a smart light blue Bentley, a Ford Zephyr, a Ferrari  and many more old favourites.  There were also 3 E-type Jaguars on display. Around 60 classic vehicles were on display.

In the motorcycle park, we had some nice machines, including a return of the Rudge 500cc Sports Special, a Honda CB500-4, 2 BSA A10 650cc twins, several BSA singles, Triumph Bonneville’s, a Suzuki T500 2 stroke twin, and a couple of Harley Davidsons – to name a few.  In all there were over 40 motorcycles of all ages present.

The next Gathering is on 19th May 2016 so please make a note in your diary – and bring a friend. Our success is down to the gatherers who generously attend and participate in the spirit of the event – that’s you! We thank you and hope you will continue to support us. Thanks must go to those who organise the event (Gilbert, Roly, Debbie, Mike and Martin); those who help on the days (Brian K, Janet T, Sue B, Thomas, Malcolm and Bill); the raffle coordinator (Loreen); sustenance providers (Andy and his team); the cakes and drinks ladies (Carol F, Maureen H, Ros M and all who donated cakes), the bar staff, Richard Greig for cutting the grass for us, and anyone else who I may have forgotten (Sorry!) – all of whom make the event the success it is. We know that we have made a significant increase in the amount raised for the Air Ambulance, and we shall publish details on this website (www.greethamrutland.com)  and the Gathering Website (www.greethamgathering.co.uk) of how much, along with a picture of the cheque presentation once we have it all organised. 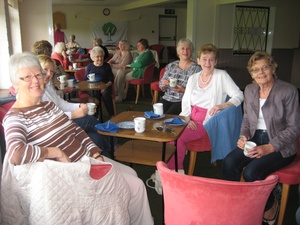 Greetham WI celebrate the 100th birthday of the WI in a traditional way with a coffee morning .Thank you for your support we have made £100 for the Playground fund too !and the cakes were rather scrumptious .

The 3rd Greetham Gathering of 2015 took place on Thursday 16th July, at the Greetham Community Centre in Rutland.

The event started slowly but was well attended with over 65 classic cars and 30 classic motorcycles. This when added to the supporters who also attended meant that around 200 vehicles turned up – a great indication of the interest and support that exists over this growing event. Amongst the many cars on show were, the literally just-restored (finished hours earlier that day - by Colin Easson Motors of Cottesmore) Austin Mini, a beautiful Lanchester, a Citroen DS, a Bentley, Daimler, Ferrari, Maserati, several Lotuses, MGs Triumph TRs and some classic “everyday” cars like an Austin Maxi, Ford Fiestas, Morris Minors, Rileys, Wolesleys and VWs.

In the motorcycle park, there were some interesting machines, including a Rudge 500cc Sports Special, a Honda CB750-4 and other Honda 4s, an Ariel single and an Ariel twin, a Kawasaki 750 triple (2 stroke) and a Kawasaki 1000cc six cylinder, a Velocette Venom, a motorised pushbike, a Norton Dominator, a modified BSA Bantam with a tank mounted gear change and a Honda C90 Cub. The Honda Cub is still the world’s most produced motorcycle and was the death nail in the British motorcycle industry – offering a cheap, reliable and efficient means of transport. It’s not the most exciting motorcycle – but its success must be admired. In all there were over 60 motorcycles of all ages present.

The next Gathering is on August 20th so please make a note in your diary – and bring a friend. With MG celebrating a big anniversary this year, it would be nice to see as many MGs turn up as possible. Over to you MG owners! See www.greethamgathering.co.uk for more details of the Gatherings, or just turn up at Greetham Community Centre, Great Lane, Greetham LE15 7NG from about 5:00pm onwards. Parking, hot food, cakes, teas, drinks, and bar. £1 per vehicle to enter. All entry and raffle profits from the Gatherings goes to the local Air Ambulance.

Beautiful, sunny weather made for a magnificent fete this year! It drew in the crowds who enjoyed

down the rollercoaster. This year the fete was opened by Diane and John Creasey – Diane is a

Reader with the church. The surprise activity of the day was the maze which was a triumph of

Weston. The winner, Jessica Douglas (age 7), was presented with a trophy sponsored by The

Wheatsheaf. Our visitors included Exton and Greetham School together with a crew from Oakham

Fire Station and the Police Community Support team. Their vehicles were a big draw for boys of all

cakes, tombola and raffle all sold out in record time and once again we guessed where the sheep

pooed! It was fantastic to see so many families from the village with young children having a brilliant

The Church would like to give massive thanks to all those who contributed to the fete. We are ever

grateful for your support and generosity in making this event a success. Thank you for your

donations to the stalls and tombola, for sourcing materials for the games, for cake baking, for

providing lots and lots of help on the day and for turning up to enjoy yourselves.

In particular I’d like to thank our local businesses – The Plough, The Wheatsheaf, The Black Horse,

the campsite, Estelle (reflexologist), Pippa (hairdresser), the village shop and Snapdragon (shop in

Oakham) – for their raffle donations and help. Please support them, more information on

www.greethamrutland.com. Also, thanks to Stef Douglas for arranging the fire engine, the Bothwell

family for providing sheep and hay bales, and to the Hinch family for more hay bales and toilets.

posy to Diane; Thomas who did his paper round, helped all day from early morning (did you spot him

under the Brucie mask) then went to his third job at The Plough; and Elke who, as part of her Duke

of Edinburgh award, helped with the publicity of the fete, made bunting and ran the rollercoaster

(did you see her amazing shop window display?). Their mum and dad, Steph and Harro, also helped

extensively and are probably wondering how this all happened!!

Thanks from the Church Fete Committee.