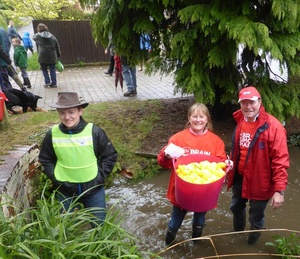 THE GREETHAM DUCK RACE
Preparations for the annual Greetham Duck Race started early and the weather was perfect if you happened to be a duck! Tents were erected at the start and finish lines to keep the many spectators dry, and the village scene was set.
At 11 am the rain stopped and we were ready for the start of the first of four heats each with 50 ducks .Steve the starter CradDUCK and his helper Jessica Easson released the ducks which set off at great pace due to the high level of the stream. The course marshalls Toby, James and Thomas (the comedian Defrees) could hardly keep up. Each race seemed to get faster, with the top 3 of each race going through to the final. The gathered crowd could hardly contain themselves!
The 12 ducks in the final were, 17 Andrew Collin, 49 Sarah J Harding, 14 Oliver Wight, 95 Bill Harding, 76 Paul Simpson, 59 Ann Gould, 113 Rees Richards, 146 Janice Walters, 124 Deb Easson, 154 Tom De Vries 167 Harry Arkle and 155 Bilson, and some of the excited owners were present to witness the spectacle, it was very exciting to see the top ducks set of neck and neck or beak and beak! James was that excited he fell in the stream which wasn't at all funny! (The annual ‘I think he's quacking up joke’ was murmured)
The results of the close fought final were 1st  76 Paul Simpson £15, 2nd 124 Deb Easson £10 and 3rd 95 Bill Harding £5, and thanks to all podium winners who donated their winnings back to our chosen charity .The booby last place was 154 Tom De Vries who won a giant inflatable duck!
After the race we all adjourned to the Plough where we drew the well supported raffle, all in all we raised £505 for The Brain Tumour Charity.
Brain Tumours are the biggest cancer killer of children and young adults under 40, All funds raised will go towards vital research.
Many thanks to all who helped on the day and for all who attended and for your generous support.
Roly & Debbie Easson